Asian food 101:  With an area of ​​17.210.000 square kilometers, Asia includes 49 countries and is the largest and most densely populated continent in the world. The population here accounts for about 60% of the world’s total population.

From Siberia in the northernmost part of Russia, to thousands of tropical islands in Indonesia in the south; from the vast Arabian desert of Saudi Arabia in the west to the lush, mountainous islands in Japan in the east – regardless of the natural geographical conditions, climate type, or Economically, politically, and ethnically, Asia presents unparalleled diversity. Do you know Asian food? In particular, the food culture in Asia is changing endlessly.

Against this background, isn’t it too difficult to write an all-encompassing guide to Asia, complete with all the relevant and practical tips, and at the same time be authentic and helpful? when! Of course! very!

Disaster! On the one hand, there are delicate, carved Japanese dishes, and on the other hand, Turkish food with bold ingredients and strong flavors.

Having said so much, we just want to say that while the breadth and depth of Asian cuisine is worth studying every little detail, it is impossible. Therefore, according to the culinary tastes and the characteristics of ingredients in various regions of Asia, we have divided several geographical regions in space, and introduced Asian cuisine as a unit.

In this way, we can not only have a comprehensive understanding of the complex and diverse Asian cuisine, but also stop briefly in some representative countries to learn more about the local cuisine.

Do you know Asian foods?

Then grab your passport (or bring a snack) and join us on a culinary journey through Asia!

In this guide, we will present you 6 major regions in Asia, introduce you to the most commonly used and indispensable local cooking ingredients, and then learn more about the cuisine in the selected countries.

A small reminder: When it comes to Asia, many people habitually think of East Asia, Southeast Asia, and sometimes South Asia, including India. You will find in a while that we also mainly selected countries in these three regions, focusing on their food culture, dishes, ingredients and cooking methods.

Although the basic ingredients are the same, the resulting dishes show a variety of flavors due to different cooking methods. It’s easy to spot when comparing Chinese, Japanese, and Korean cuisines.

Every region in China, no matter how big or small, has its own food characteristics. Adjacent villages, or even neighbors across a wall, will have their own different cooking habits.

But generally speaking, Chinese cuisine can be roughly divided into four major cuisines (sometimes also divided into eight major cuisines). In this way, it will be clearer for foreign friends who want to know that China is okay. China is an ancient country with a vast territory.

The diverse natural geographical and climatic conditions determine the diversity of this country. The various ethnic groups living together on this land and their respective lively cultures have enriched this ancient eastern country together. Now let’s take a look at the important ingredients and dishes in the four major Chinese cuisines.

Southern – Cantonese (Cantonese): Cantonese is the earliest Chinese cuisine to be known overseas. Cooking dishes with onion, ginger and garlic, hoisin sauce, plum sauce, tempeh, and oil consumption has become the symbol of most foreign Chinese restaurants, which are all derived from the culinary characteristics of Cantonese cuisine. 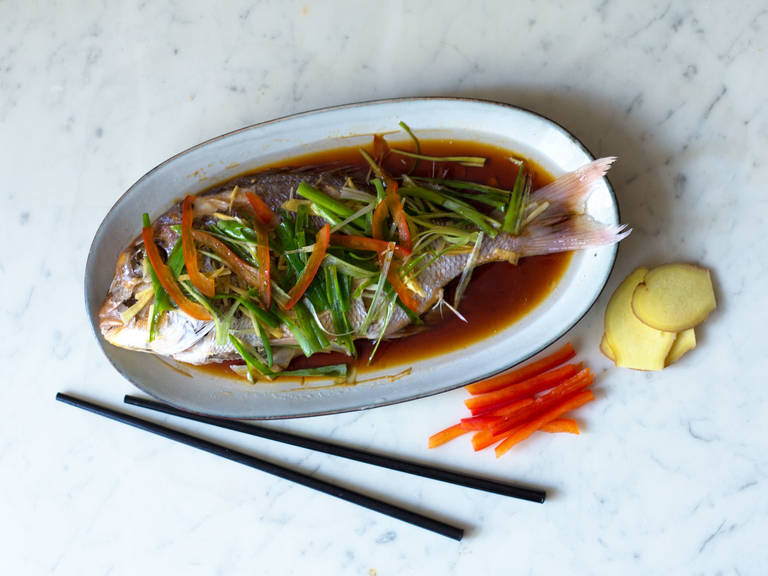 East – Huaiyang Cuisine: Huaiyang Cuisine is famous for its elegant style, exquisite knife skills and various soup dumplings. Its dishes are light and sweet, not spicy. The focus is on maintaining the original color of the ingredients, so as to present the beauty of the food.

Yangzhou was once an extremely important commercial city in Chinese history, with a long and prosperous history. Zhenjiang balsamic vinegar is used in many Huaiyang dishes. It is a famous rice vinegar in China.

It is dark in color and has a unique and strong smoky flavor. The classic Huaiyang dishes include soup dumplings, Yangzhou fried rice, and boiled dried silk. 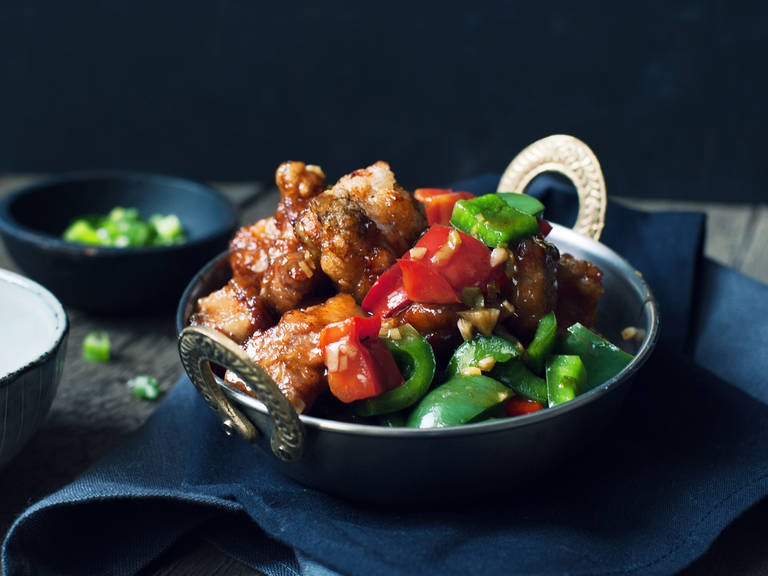 Western – Sichuan Cuisine: Sichuan Cuisine is known for its spicyness, and it is cooked with a lot of garlic, bean paste, various peppers, peanuts, and peppers. The combination of these ingredients creates the strong and varied taste of Sichuan cuisine. The eight common flavors in Sichuan cuisine are fishy, ​​hot and sour, peppery, strange, spicy, red oil, ginger juice, and homely. It is reflected in classic Sichuan dishes, such as Mapo Tofu, Boiled Fish, Chongqing Hot Pot, and Kung Pao Chicken. 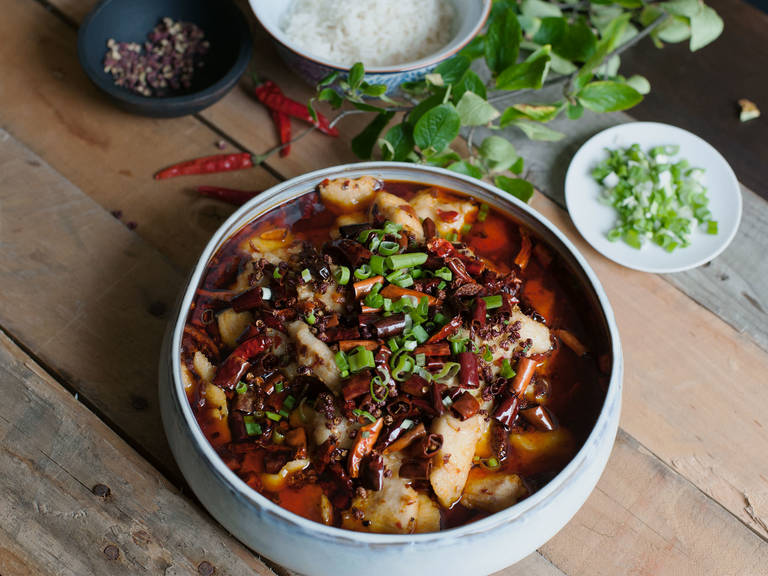 The current emerging “seasonal” food trend in the global catering industry should be brought about by the spread of Japanese cuisine. Using seasonal ingredients is an important, even supreme, principle in Japanese cuisine. From young bamboo shoots to cucumbers, from chestnuts to sweet potatoes, from unknown types of fish to basic grains, the ingredients available each season are different. These seasonal ingredients are called “Xun” and can only be bought during the season for cooking.

The ingredients of Japanese cuisine are not only seasonal, but also often sourced locally, so that the freshness of the ingredients can be guaranteed. Every season means a different taste, a different texture, but the same freshness. Japanese cuisine is an art of making a lot of money. It is simple but not simple, restrained but still unique, concise but not out of style.

In addition to using the best seasonal ingredients, traditional Japanese cuisine often follows five principles to achieve harmony within each dish, each dish of a combination (such as kaiseki), and bento pairings: use a variety of colors Brings visual enjoyment, sophisticated taste to stimulate the palate, nutritional balance, culinary style skills and variety of flavors (sour, sweet, bitter, salty, umami). Come try our recommended recipes and practice these cooking principles as you cook!

A traditional meal of Korean cuisine consists of rice, vegetables, and meat, accompanied by a variety of side dishes, namely rice dishes, such as kimchi, wraps, boiled vegetables, steamed vegetables, dry stir-fried vegetables, and sauce stewed vegetables. It is not uncommon to have as many as 15 dishes in one meal. In Korea, many people often have a meal together. Each person will have a small bowl of rice, and many dishes will be shared on the table.

Do you know Asian food? Bibimbap

In most countries in Southeast Asia (Brunei, Cambodia, Timor-Leste, Indonesia, Laos, Malaysia, Myanmar, the Philippines, Singapore, Thailand, Vietnam), the main seasonings used in cooking are: vinegar, shrimp paste, rice, fish sauce, Peppers, various herbs. Let us go from the “jealous” Philippines all the way to Vietnam, where various culinary elements are balanced, and start an adventure through different food circles in Southeast Asia!

If we study carefully, we will find that every cuisine introduced in this article can be used for cultural studies to see what chemical reactions will occur when different cultures collide. The most prominent is Filipino cuisine.

There are as many as 170 ethnic groups living in the Philippines, each with its own traditions and food culture. So Filipino cuisine is difficult to generalize and categorize. In addition, food cultures from Malaysia, Indonesia, China, Spain and the United States also have various influences on the country’s eating habits.

Here you can eat the roast suckling pig brought by the Spanish colonists, and you can also taste the spring rolls brought by the Chinese immigrants. Filipino food is always so unexpected, and the Philippines is well-deserved as the “food melting pot”.

The most important culinary principle of the Filipino diet is that each dish will play a role in balancing the sweet, sour, and salty flavors throughout the meal. The most common ingredients here are various vinegars (mainly oil palm vinegar), rice, coconut milk, Calamansi, and lots of pork. The most famous Filipino dish is Adobo. This dish is prepared by marinating meat, seafood or vegetables in vinegar, soy sauce, garlic, and black pepper, then simmering. This dish is usually served with rice and is enjoyed with a fork and spoon.

Careful cooking, so that sour, sweet, bitter, salty and umami taste harmoniously coexist, is an important part of daily life in Thailand. Most Thai dishes will have specific and strong flavors, but with the addition of fish sauce and various fresh herbs, the strong flavors will be well neutralized, making the whole dish unique but not obtrusive.

The basic ingredients of Vietnamese cuisine are very varied, ranging from lemongrass, ginger, fish sauce to fresh Thai basil, mint, and lime. Vietnamese food is definitely one of the healthiest Asian dishes. It is low in oil and dairy free, yet uses a wide variety of fresh herbs, vegetables, egg whites, and staples like bread, rice, pho, etc. Some Vietnamese dishes are very famous even abroad.

As long as there are places where Vietnamese people live, there must be these wonderful flavors. Examples include fried shredded rice (with roast pork, pickled vegetables, eggs, fried shredded rice with sweet and sour fish sauce), pho soup (with beef, bean sprouts, fresh herbs, chili, etc.), Vietnamese sandwich (with Baguette-like bread with sausage, pickles, cucumbers, jalapeños, etc. in the middle.

Do you know Asian food? Vietnamese Beef Sandwich with Cilantro

Although Nepalese, Pakistani, Sri Lankan, and Afghan diets vary in terms of ingredients, cooking habits, range of influence, etc., ghee, chili, certain spices, lentils, and lentils are used throughout Indian cuisine. chickpeas. Beef and pork are less common here, replaced by fillings for curries, basmati and roti cooked with a variety of chicken, lamb and fish. Before introducing other South Asian cuisines, let’s get to know Indian cuisine first !

Like other Asian countries, the differences between Indian cuisines are very diverse according to the geographical environment and economic development. But many dishes start out with common seasonings. Chili peppers, black mustard, cumin, cardamom, turmeric, coriander, ginger, fenugreek, bay leaves, curry leaves are widely available nationwide.

In India, many religious believers strictly follow the canon’s diet. For example, Jainism has strict vegetarian regulations, and Hinduism prohibits beef, and slaughtering cows can even lead to prison sentences.

If you want to try cooking Indian food at home, first prepare a well-organized spice rack, then open the recipes below and use them freely!

To get acquainted with these Middle Eastern meals, try the recipes suggested below and let us know which one is your favorite in the comments!

A fusion of cuisines from all over Asia

No matter how diverse Asian diets may be, there is one delicacy that everyone shares: dumplings. Dumplings can be steamed, fried or fried. But each region’s dumplings have their own unique shapes, fillings, skins and methods of making. From Permeni in Russia in the north to Samosa dumplings in India in the south, dumplings are found all over the Asian continent.