ASUU releases bulletin as strike reaches 16 weeks: The Academic Staff Union of Universities (ASUU) has released a bulletin to update its members and the public on the progress made so far. The updates are highlighted as follows; 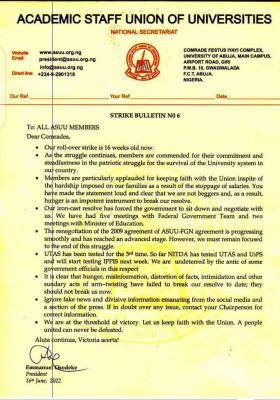 • As the struggle continues, members are commended for their commitment and steadfastness in the patriotic struggle for the survival of the University system in our country.

• Members are particularly applauded for keeping faith with the Union in spite of the hardship imposed on our families as a result of the stoppage of salaries. You have made the statement loud and clear that we are not beggers and, as a result, hunger is an impotent instrument to break our resolve.

• Our iron-cast resolve has forced the government to sit down and negotiate with us. We have had five meetings with Federal Government Team and two meetings with Minister of Education.

• The renegotiation of the 2009 agreement of ASUU-FGN agreement is progressing smoothly and has reached an advanced stage. However, we must remain focused to the end of this struggle.

• UTAS has been tested for the 3rd time. So far NITDA has tested UTAS and UPS and will start testing IPPIS next week. We are undeterred by the antic of some government officials in this respect.

• It is clear that hunger, misinformation, distortion of facts, intimidation and other sundary acts of arm-twisting have failed to break our resolve to date; they should not break us now.

• Ignore fake news and divisive information emanating from the social media and a section of the press. If in doubt over any issue, contact your Chairperson for correct information.

• We are at the threshold of victory. Let us keep faith with the Union. A people united can never be defeated.

JAMB Syllabus for All UTME Subjects 2023

Academic CV for Scholarship Step by Step Guide (With Examples)